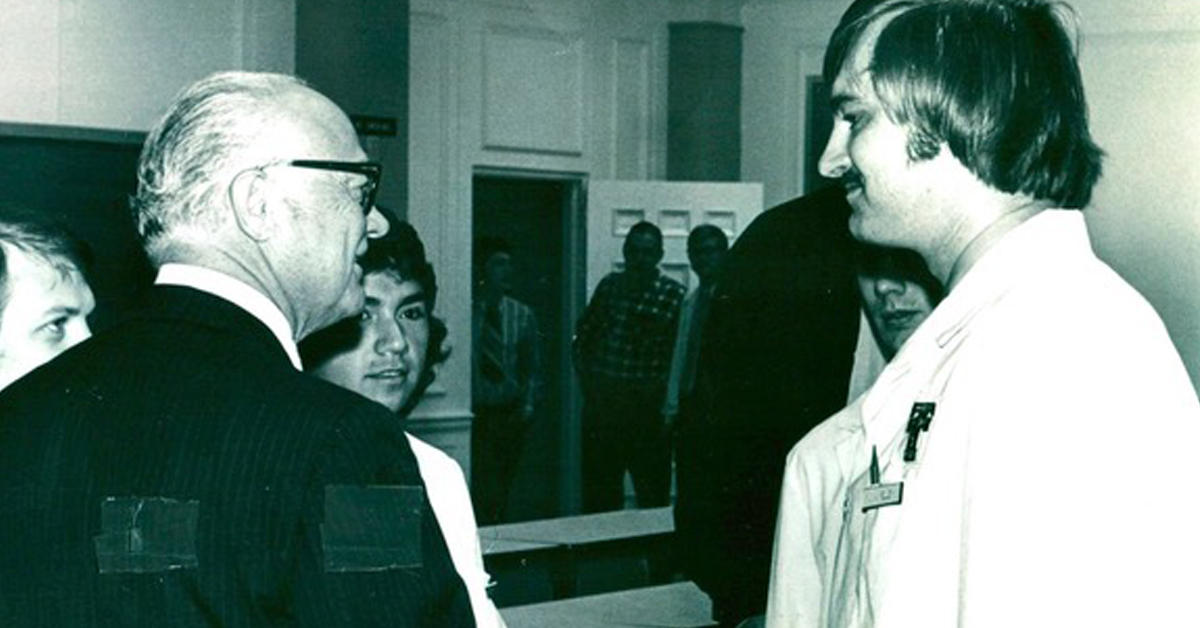 The pioneering spirit was ubiquitous in 1969. Apollo 11 landed on the moon and the first message was sent over the network that would become the basis for the Internet. Even though America looked to the future, the top grossing movies that year included several westerns. In a brilliant move that brought those contrasting ideas together, visionaries decided to embark on changing the future of health care and the area.

In May 1969, the 61st Texas Legislature and Gov. Preston Smith created Texas Tech University Scool of Medicine as a multi-campus institution with campuses in Amarillo, Lubbock and Odessa.

One of the original members of the team that was entrusted to teach the next generation of health care professionals was John Pelley, Ph.D., MBA, professor, Department of Medical Education.

“I started a month before we opened the doors. That was in June ’72. We had to get organized quickly because we taught right away when the school opened on July 1,” said Pelley. “We only admitted ‘first year students,’ so we didn’t have anybody in the second year. We had to get our first courses organized and underway. Then, as people showed up over that semester, we were organizing for the next semester. That continued until we had the whole curriculum organized.” 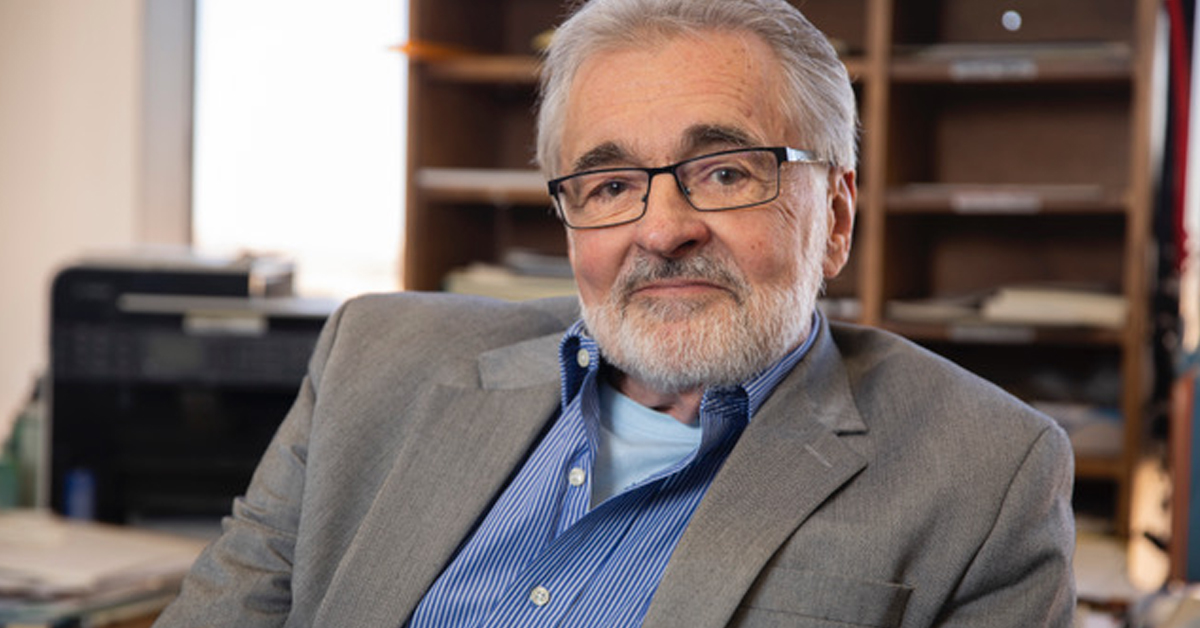 John Pelley, Ph.D., MBA, began working at TTUHSC in June of 1972 and established the School of Medicine's curriculum.

For the next couple of years, Pelley said people were arriving on a regular basis. “I wouldn’t say nearly every week, but now and then you’d look up and somebody was moving into a new office.”

Pelley joined the department of biochemistry after he completed a postdoctoral fellowship in Austin, Texas.

“The job was not advertised, but I got a phone call from someone I knew in Austin who was working with the future chair of the department here. He said, ‘John, we’re opening a new medical school. Do you want to come up to Lubbock and interview to be a faculty member?’ It was total luck,” Pelley recalled.

According to Pelley, his career at TTUHSC can be attributed to being in the right place at the right time. In his time at TTUHSC, Pelley has held several different job titles for which he said he never applied “but always cooperated.”

“I came up to visit Lubbock and everybody was friendly. Since I had a family, I said yes to my first real job. We moved up to Lubbock—my wife and first child—and set up shop. It was all busy, fun and exciting. You knew that you were the first to establish what was going to follow, which is what we now see here,” Pelley said.

While TTUHSC is now known for its innovation and research, Pelley said back then it was difficult to conduct research.

“We were borrowing labs over in the chemistry building, which was very inefficient. Our teaching involved giving lectures in classic stand up. We didn’t have Internet, whiteboards or even overhead projectors. We wore lab coats to keep the chalk off our clothes,” Pelley said.

Pelley ended up working for 15 years in administration of the medical school curriculum. He said the work he did there led him to acquire a strong interest in the learning process and has spent the last 30 years working on educational projects in applied metacognition. 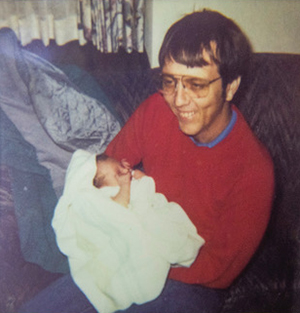 The first baby born from in-vitro fertilization in Lubbock, Texas was performed by Samuel D. Prien, Ph.D in 1989.

“I thought that I was going to be here a short while after my master’s because I was not ready to go on for my Ph.D. at that point. I thought I would work for a few years, get my Ph.D. and go on,” Prien said. “I grew up across West Texas and went to Texas Tech as an undergraduate and did my master’s there. I thought I was moving on, but I worked in anatomy for about seven years and had the opportunity to pursue my Ph.D. Then I became director of the IVF program and then director of the lab.”

He served as the sole embryologist in the in-vitro fertilization program for 25 years and the director of all OB-GYN clinical labs.

“Back in the beginning, the building was mainly shelf space. Before we moved into the B pod we used to have a basketball goal and we’d play lunchtime basketball inside the building. Because I worked a lot of weekends with infertility patients, it was not uncommon to see a covey of quail on top of the rail running back and forth because there was not so much going on in the buildings. There were also coyotes and all kinds of critters that used to roam around here,” Prien said.“I thought I was going to end up someplace else and it just didn’t happen. Back then there were maybe 400 or 300 people here and we pretty much knew everybody,” Prien said.

The campus grew and offices filled the empty shells in the “pods.” The Academic Classroom Building followed. As the campus grew, the city around it grew as well. 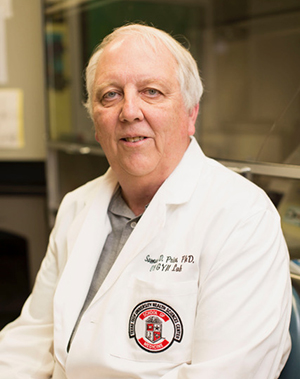 Samuel Prien, Ph.D, began working at TTUHSC in 1982 and has been at the frontline in in-vitro fertilization at TTUHSC.

“I don’t think Lubbock would be nearly as large as it is now had the Texas Tech University Health Sciences Center not developed. I would also say that 50 percent of the hospitals, if not more than that, in the surrounding communities wouldn’t exist right now. We did exactly what the original mission was. We’ve taken care of the people of West Texas. We’ve been able to train doctors and recruit doctors. Before that, if you needed major care, you got on a plane or drove to Dallas or Houston or further,” Prien said. “Research-wise, there are multiple things we have developed over the years and are developing that could have worldwide impact. And it happened right here in Lubbock, Texas.

In the early years, there were regular threats by various politicians to shut down TTUHSC, but the faculty stayed the course and kept on doing their jobs.

“It was a bit demoralizing. People would wonder if they’d have a job in September. As a scientist, there were not many jobs available to me back then and I didn’t want to have to leave,” Pelley said.

He said even though the uncertainty ended when the Schools of Nursing and Health Professions opened and enrollment took off, something about this place kept him here.

“It’s a great place to bring up kids, but there’s another thing that grows on you that keeps you from leaving. When you’re here, you’re part of a community as opposed to just an organization,” Pelley said. “That’s the other neat thing about the place. I work with colleagues now that I taught and they’re out in the community and they have seen and treated members of my family.”

Prien said he is also proud of the work he’s done with students who come from both TTUHSC and TTU.

“We could go on for hours about that. I have been able to bring students from both campuses to work together. They’ve won national awards. I also have former students who are chairs in their departments and are training the next generation,” Prien said.

As Pelley and Prien pointed out, TTUHSC’s impact has expanded beyond the region and generations. Its impact can also be seen in other regional universities which followed and have turned to TTUHSC as a model.

“Our identity is that we’re regional and we were one of the early ones in the country. Also, there are a fair number of what are called ‘community-based schools’ where the students are trained in various local communities,” Pelley said.

“When we had our 10th anniversary, we had a banquet outside on the second floor in the space where the current dean’s office is. If you walk down the hallway that passes the dean’s office and the president’s office, you will notice that the interior wall of the hallway is an exterior finish with the doors opening out. We celebrated that we’d survived. As for me, I’m just now picking up steam. All I’ve got on my mind is the next project.”