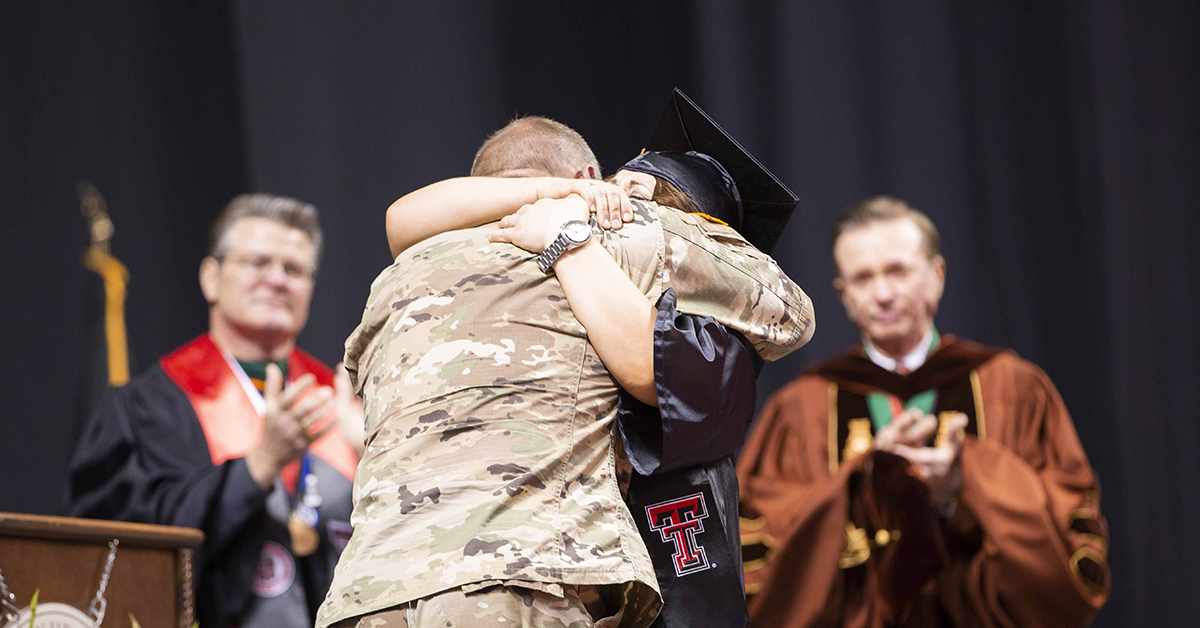 Krislyn Perkins, an R.N. to BSN nursing student, prepared for the excitement of crossing the stage to mark the end of her hard work to achieve her degree from the Texas Tech University Health Sciences Center (TTUHSC) School of Nursing. Before the ceremony, Perkins received an unexpected surprise with a special videotaped message from her father, U.S. Army Captain Andrew “Beau” Baer, who was deployed and could not be there in person.

Perkins stood on the stage with TTUHSC President Tedd L. Mitchell and School of Nursing Dean Michael Evans, and was emotional as she watched her father’s heartfelt message on the large screen.

“I miss my Dad everyday,” Perkins said. “I wasn’t expecting him to be able to be here for my graduation.”

Perkins then spotted her father as he walked across the arena up the red carpet. The commencement audience with other graduate family and friends gave him a well-deserved applause as he ran up to the stage to give his daughter a huge hug.

Baer had been completing training in Puerto Rico for months. He was scheduled to leave for Fort Hood before deploying to Central America for another 9 months. Baer requested time from his commander to allow him to leave early to make it to his daughter’s graduation and then head back.

“I am so very proud of Krislyn,” Baer said. “She has overcome so much working full time, being an amazing mom to two boys, and then going to school and now finishing her degree.”

Perkins, who works as a charge nurse, said she wants to set a great example for her sons, 2 year-old River and 12 year-old Kyler.

“I want to show them you can get an education at any age,” Perkins said. “I want to be best role model for them.”

Baer has served In the Army Reserves for more than 15 years. He has served in Panama, Belize, and Afghanistan and many other locations.

“The toughest part of my service is missing out on family milestone events like these through the years,” Baer said. “So to be here and surprise her meant the world to me. We are so thankful to everyone.”