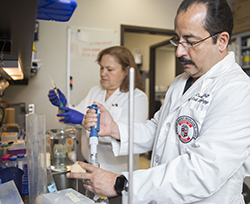 Researchers at the Texas Tech University Health Sciences Center (TTUHSC) Department of Cell Physiology and Molecular Biophysics and the Center for Membrane Protein. Research have determined the kinetic cycle of a potassium channel at atomic resolution. Potassium channels are important for the normal functioning of the human body. The research study, "The Gating Cycle of a K+ Channel at Atomic Resolution," was featured in the November issue of eLife.

Luis G. Cuello, Ph.D., an associate professor in the TTUHSC Department of Cell Physiology and Molecular Biophysics, said through this research, we now know every single atom of this molecule and what it is doing.

Ion channels are located in every living cell of the human body. They mediate ions transport into and out of the cells to signal many physiological processes. Neurons in the nervous systems rely on ion channels for cell-to-cell communication. Potassium channels are membrane proteins that create an aqueous pore, which is regulated by two internal gates that work in a concerted fashion to allow the flow of potassium ions out of the cells.

"In the perfect world, new and safer therapeutic drugs would interact only with a given targeted ion channel, but there are thousands of proteins within the human body, each of them doing a different function, and non-specific binding of currently available therapeutic drugs is the main reason for the undesirable side effects of drug therapy," Cuello said. "When a doctor gives you a medication, it not only interacts with a specific type of protein, but with many others, which causes side effects. However, knowing how a potassium channel moves at atomic resolution will allow us to target specific spots within the channel structure to correct a given illness while decreasing undesirable side effects. This is important because the pharmaceutical industry is investing billions of dollars every year in the discovery of more potent and safer therapeutic drug molecules with less side effects that can correct potassium channels dysfunction (potassium channels malfunction can cause epilepsy, heart diseases, chronic pain and diabetes)."

The simplest description of the gating cycle of the pore domain of a K+ channel requires at least four distinct kinetic states. The KcsA, a bacterial potassium channel, was cloned many years ago. In 2003, Roderick MacKinnon was awarded the Nobel Prize in Chemistry for his work on the atomic resolution structures of ion channels, among them two different kinetic states of the closed conformation of KcsA. However, it took more than a decade to determine the structure of KcsA in the open state.

Cuello, along with D. Marien Cortes, also from the TTUHSC Department of Cell Physiology and Molecular Biophysics, and Eduardo Perozo, Ph.D., a professor from the University of Chicago, determined two open state conformations of KcsA, which together with the two previous structures of the closed states from Mackinnon's Laboratory, recapitulate how KcsA moves at atomic resolution. No other lab has ever produced the kinetic cycle of a potassium channel at the atomic level. In the cellular environment, potassium channels are highly specialized proteins that must adopt different conformations to perform their biological function. These molecules change their conformation in a cyclic fashion always returning back to the initial or resting state - this is the kinetic cycle.

In 2010, Cuello and his research team created a mutant channel that was always open and although they determined the structure of this conformation, the resolution was very low, which yielded an extremely blurry image of KcsA in the open state. In this new research article, Cuello and his lab locked open KcsA by engineering disulfide bonds that will hold the channel open and determined two new kinetic intermediate snapshots at very high resolution, the open-conductive and the open-inactivated states, which together with the existing structures for the C/O (high K+ -structure) and the C/I (low K+ -structure) conformations solved by the Mackinnon Lab, recreate a kinetic cycle for a potassium channel at atomic detail.

"We knew if we could trap the channel in action, while in movement, we could have something similar to a movie depicting the opening and closing of the channel at the atomic level," Cuello said. "When I was young, I remember those comic books in which by flipping the pages you could see a little drawing moving. We have done exactly the same here but with a molecule and at atomic resolution. KcsA contains two different types of gates, the activation and the inactivation gates. This study shows how they work in a concerted fashion to regulate the flow of potassium ions coming out of the cell."