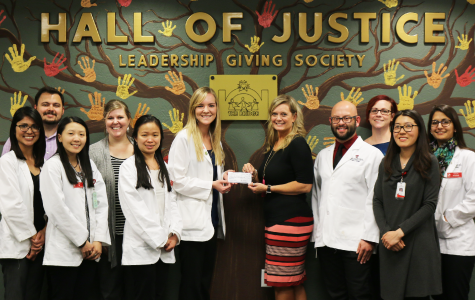 As each new academic year gets underway, the School of Pharmacy’s Office of Professional Affairs hosts a leadership retreat that brings together the student leaders of all pharmacy classes, campuses and organizations.

At the 2017-2018 retreat in August, leaders from the four School of Pharmacy campuses—Amarillo, Abilene, Lubbock and Dallas—were challenged to set up campus-wide goals to unite students and organizations on their respective campus.

One of the goals set by Amarillo student leaders was to raise money for a local nonprofit. That goal was realized April 24 when the group presented a check for $1,833.87 to The Bridge, a children’s advocacy organization through which law enforcement, child protective services, prosecutors and the medical and mental health communities work together to advocate for and assist children impacted by child abuse.

Fourth-year pharmacy student Rachel Jackson, vice president for the School of Pharmacy’s Class of 2018 and Amarillo Student Council secretary, said The Bridge was chosen at the council’s October meeting.

“After The Bridge was selected, 11 School of Pharmacy student organizations held at least one fundraiser to benefit The Bridge, and some organizations partnered together to raise their contribution,” Jackson said.

“The Kappa Psi, Delta Pi chapter was the top contributor this year, and the Amarillo Student Council thanks them for their hard work and dedication to successfully completing this campus goal,” Jackson added. “However, this donation would not have been possible without the support of many people, including the president, treasurer and fundraising chair of each of the 11 student organizations.”