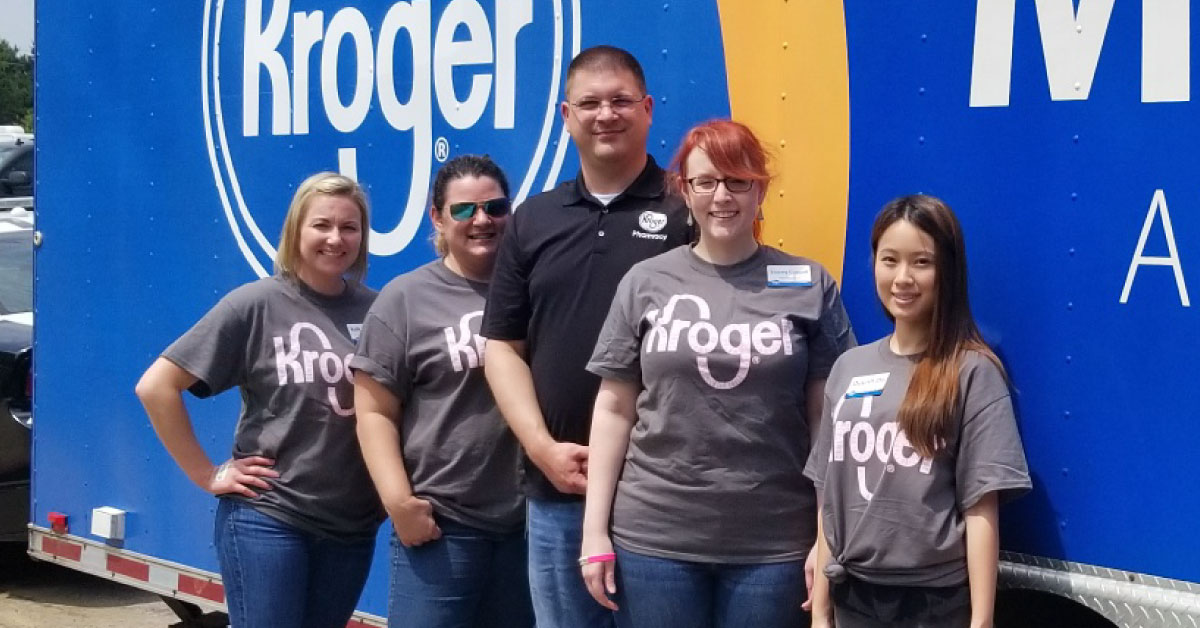 As those affected most by Hurricane Harvey begin the arduous process of putting their lives back together, heroic stories of people helping people will continue to inspire and fuel the rebuilding effort. Some of those stories belong to School of Pharmacy alumna Quynh Do, Pharm.D., a Houston native and member of the Class of 2017.

Do and fellow School of Pharmacy alumna Kelli Anthony, Pharm.D. (Class of 2014), were part of Kroger’s effort to help people from the Texas Gulf Coast who escaped Harvey by evacuating to the Dallas-Fort Worth Metroplex (DFW). They each spent several days as part of Kroger’s Dallas team, manning the company’s mobile pharmacy and working at the Walnut Hill Recreation Center in North Dallas alongside various church groups, veterans, Red Cross personnel and responders from the Federal Emergency Management Agency.

In addition to providing evacuees with free food, mobile showers and clothes from donation trailers, Do said the volunteers also organized moonwalks for children, served free ice cream and manned a mobile pharmacy.

“The opportunity to work in a mobile pharmacy trailer is different and interesting, but most importantly, it was my opportunity to help the community that gave so much to me,” Do said. “I saw Texans helping one another on social media and there was a line of volunteers to help in Houston. I wish I could have joined my friends in Houston to help those in need, but I'm glad I was given this opportunity because other pharmacists didn't and I know they would love to help.”

Do said the most memorable moment for her was when a woman and her family came to get their medications and relayed how they didn't have any food and had evacuated prior to the storm. Despite their situation, Do said the woman only asked for blood pressure and diabetes medications.

“She was so worried for her diabetic dad who was stuck in Port Arthur,” Do said. “We all listened and gave her a group hug; her tears and joy were felt by all in the trailer. I will not forget that moment.”

Do said the opportunity to work in the trailer was more rewarding for her than for the evacuees. In addition to handing out free medications, she said the mobile pharmacy also provides humanity.

“We are all caring individuals and we are here to provide a helping hand and support to all who need it,” Do explained. “I grew up in Houston, so it is natural for me to help those from my city and those in need. I am still devastated; it was hard for me to read the news and look at live updates while my friends and family were stuck in their homes. It's hard not being able to help them, but I am happy that they're all safe, including the pets. It will take a long time to rebuild, but I am so proud to see Houstonians and Texans reaching out to help each other.”