Breaking a boundary: Women outnumber men in TTUHSC School of Medicine class of 2021 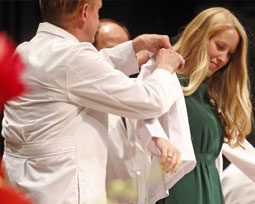 The number of women who choose to pursue medicine at the Texas Tech University Health Sciences Center has been creeping up.

But according to Dr. Steven Berk, HSC executive vice president, provost and dean of the HSC School of Medicine, those numbers have never reached 50 percent - until this year.

On Friday afternoon, 180 new students - which included 92 women - donned the first white coats of their medical career, marking the first year in the school’s more than 40-year history that women outnumber men in the incoming class of first-year medical students.

“The significance is now we’ve reached equality in the people entering medicine,” she said. “It’s the first step and that’s important. This is exciting.”

In the HSC’s early years, there were few women, Berk said. The first HSC class in 1974 had three women in a class of 33. The ratios have improved some in recent years.

Women have made up at least 40 to 45 percent of each new HSC class in the past several years, he said.

“It’s not like we’re breaking any glass ceiling,” he said. “There are other medical schools that have more women than men. But it’s a very new phenomenon.”

Women have been underrepresented in STEM (science, technology, engineering and mathematics) careers for many years, she said, especially in positions of leadership within those professions. Dissanaike is one of the few female department chairs in medicine at HSC and across the nation.

According to The Physician Workforce in Texas, a report by the Merritt Hawkins North Texas Regional Extension Center published in April 2015, women make up 33 percent of physicians in the United States and 31 percent of Texas physicians.

Berk said the numbers are growing, but it’s something that will take time to fix.

“As many women in the field will tell you, we’ve got plenty of women in medical school, plenty of women on the faculty,” Berk said. “But when you get to the top administrative positions, at least nationally, then you don’t have the same representation. That’s going to take time.”

“Honestly, personally, I feel really proud,” Jacqueline said. “It’s showing females out there are getting encouraged to pursue professional careers like these that, in the past, were predominantly men.”

That thought never crossed their minds when she and her sister began pursuing the path to don a white medical coat, Jacqueline said.

Science was always a subject that piqued their interest, she said. Pursuing a career in medicine seemed like a natural fit for both.

It was a significant decision for them because Jacqueline and Juliana, who are Hispanic, are the first in their family to attend college and the first to pursue a career in health.

“In our culture, in Hispanic culture, usually it’s you graduate high school and you build a family straight off,” Jacqueline said. “Secondary education isn’t much of a big thing.”

In recent years, Juliana said it seems that idea has changed.

“More women are starting to go into pursuing secondary education and stuff like that,” Juliana said. “They are the ones that show that it is possible to do this.”

She and her sister are part of what’s breaking that mold, not just for Hispanics, but for women, she said. And they celebrated when they were accepted to HSC medical school.

The fraternal twins are interested in pediatrics and family medicine, both of which Dissanaike said have more female representation in the field than other specialties.

Leadership in those specialties still tends to be male-dominated, Dissanaike said.

Berk said “there’s still a tremendous amount of work to do.”