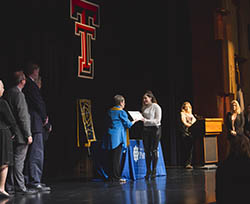 This March, the Honor Society of Phi Kappa Phi installed its 343rd chapter at Texas Tech University Health Sciences Center (TTUHSC). Founded in 1897 at the University of Maine, Phi Kappa Phi is the nation’s oldest and most selective all-discipline collegiate honor society.

The installation of the TTUHSC chapter came after a thorough chartering process and approval from the society’s board of directors. To be eligible, an institution must be a regionally accredited four-year college or university with an established reputation of excellence and an expressed commitment to upholding the values of the society.

The society’s mission is to recognize and promote academic excellence in all fields of higher education and to engage the community of scholars in service to others. Some of the organization's more notable members include former President Jimmy Carter, NASA astronaut Wendy Lawrence, novelist David Baldacci and YouTube co-founder Chad Hurley. The society has awarded approximately $15 million since the inception of its awards program in 1932. Today, $1.4 million is awarded each biennium to qualifying students and members through graduate fellowships, undergraduate study abroad grants, member and chapter awards and grants for local and national literacy initiatives. For more information about Phi Kappa Phi, visit www.PhiKappaPhi.org.

TTUHSC's first chapter of Phi Kappa Phi were inducted this October. Congratulations to our Red Raiders!