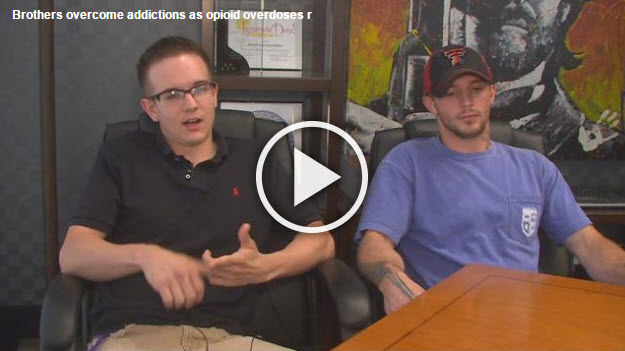 Gage and Caleb Tynes are brothers who were gripped in the throes of opioid addiction.

"I kind of got introduced summer of 8th grade," Gage, 26, said. You know, my friend said 'hey, you wanna take these things?' My friend took them and he said he did better in soccer... and I was like sure."

"We started using when were were in like middle school," Caleb, 23, said. "So 7th grade was like the first time I started smoking weed. You know, he started first and I was like hey, big brother's doing it so I might as well."

Through high school their drug usage spiraled out of control.

"Alcohol and pills and all that other stuff... I just felt like it wasn't enough and it wasn't doing it for me, you know?" Caleb said. "So I walk in the bathroom one night and there's a burnt spoon by the toilet and I was like, so that's how my mom is dealing with her issues and all this other stuff so I'm going to do the same thing. So that's when, that night I got heroin and that's when I figured out, this is my drug of choice and this is what I'm going to continue to do."

Gage and Caleb were self-medicating. They were trying to relieve the pain caused by a home life in shambles. Their parents were separated and both addicts.

"Drugs was something that was presented to me and I enjoyed it at the time, but it also took away any type of, whether it was with a girlfriend and had jealousy issues, it took that away," Gage said. "I had problems in social environments and wasn't real talkative. You know, I overcame that, It was just a side-effect of it but then it also started to cause more pain."

Getting hooked to deal with emotional and physical pain. George Comiskey with Texas Tech's Center for Collegiate Recovery Communities said he's heard it all too often.

"People get introduced to opioids because of the analgesic effect," Comiskey said. "It puts people under. It deadens the pain and that's what it's used for right? It is for people with chronic pain to manage pain, but what happens with that is once someone gets to a certain level the tolerance builds up, they need more and more of it to get the effect."

Charles Seifert, associate professor of pharmacy practice at Texas Tech University, said the problem was compounded by physicians prescribing opioids without considering the damage they can do.

"For years and years and years, our medical community has said we're not treating pain appropriately," Seifert said. "Everyone's number one complaint is pain and yet instead of doing something, some other things for pain management like psychological counseling or physical therapy or maybe some other analgesics like Naproxen or Ibuprofen, which are very good analgesics, we're going to the opioids right away."

And now that pain management is going in a different direction, it creates even more problems.

Those going else where for their pain are not just getting pills either. Many turn to heroin, methadone, and fentanyl.

It is an epidemic affecting every corner of the United States.

According to the Center for Disease Control, an estimated 91 deaths each day, nearly four every hour, are attributed to opioid abuse.

In Lubbock, the number of overdoses and overdose-related deaths have mushroomed.

Lubbock County Medical Examiner Sridhar Natarajan reports of all the suspected overdoses, 49 resulted in death. That's ten more than in 2015.

"Even though it's 49, it may seem like a small number, it's pretty, it's statistically pretty significant compared to the year before," Natarajan said. "Then within the numbers, the two primary categories are the 20-29-year-olds and then the individuals in their 50s."

Natarajan said most of the overdose deaths can be directly attributed to opioids.

Despite the sharp increase in numbers, he said Lubbock is tackling the issue head on.

"We know the numbers are going up but I think the efforts that are being placed locally, I'd say they're pretty impressive," he said.

"Reach out for help," Gage said. "It's like, there's nothing new under the sun. People are going through the same exact thing, the same exact struggles. There's always a hand waiting there to help you. You just have to reach out for it."

Gage and Caleb made that reach for help and are now sober and pursing degrees at Texas Tech.

If you or someone you know is currently addicted, there are options to help. Texas Tech's Center for Collegiate Recovery, The Ranch at Dove Tree, Aspire Recovery Center, and Lubbock Lighthouse | Methadone and Subutex Treatment Services 806-744-3419 | 1308 Ave. Q, Suite A, Lubbock, TX