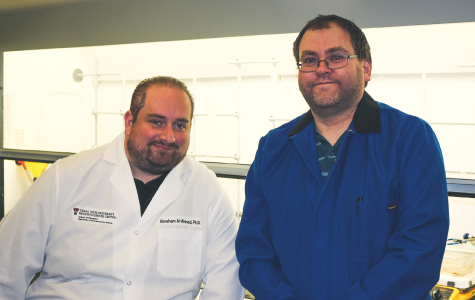 A study published in the November issue of the Journal of Medicinal Chemistry, the nation’s leading medicinal chemistry journal, describes new compounds designed and synthetized in the lab of Paul Trippier, Ph.D., that show the effects of protecting human neurons in a dish from a form of cell death common in neurodegenerative diseases such as Alzheimer’s disease and Parkinson’s disease.

Trippier said the TTUHSC research team grew functional human neurons from stem cells and then treated them with the synthesized compounds. When cell death was induced, many more neurons that had been treated with the new compounds survived than did those that were not treated.

“These compounds are in the early stages of drug discovery, but they show promise for the treatment of many different types of neurodegenerative disease,” Trippier said. “The advantage to this study is the use of stem cell-derived functional human neurons. Many studies have identified compounds that can protect either neuron-like cells or mouse neurons, but they rarely carry forward to show effect in humans.”

As the compounds developed in his and Al-Alamad’s labs already show effect in human neurons, Trippier said they are much more likely to be effective in patients, albeit in the distant future.