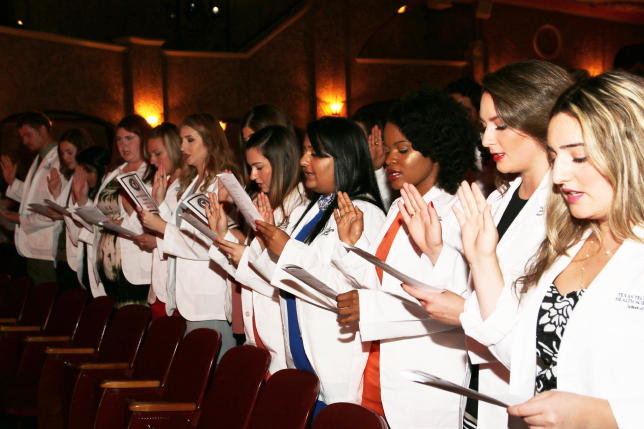 As part its annual boot camp orientation period, the TTUHSC School of Pharmacy welcomed its 157-member Class of 2021 into the pharmacy program with White Coat Ceremonies at the Abilene and Amarillo campuses. The ceremony for Abilene’s 41-member class took place Aug. 6 at the historic Paramount Theatre in downtown Abilene. Amarillo’s 116 Class of 2021 members attended the Amarillo ceremony Aug. 13 at the Amarillo Civic Center Grand Plaza. Walgreens Boots Alliance sponsored both ceremonies.

The School of Pharmacy’s two-week boot camp prepares incoming students for their first year of classes and provides them with an overview of the school’s four-year doctor of pharmacy program. The highlight of boot camp is the White Coat Ceremony, where the incoming students receive their traditional white pharmacy jackets, recite the Oath of a Pharmacist for the first time and sign the Pharmacist Code of Conduct.