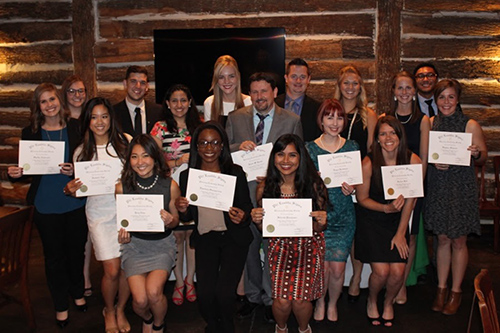 Founded in 1965, Phi Lambda Sigma (PLS) — also known as the Pharmacy Leadership Society — is a selective and nationally recognized organization that exists as across all four TTUHSC School of Pharmacy campuses as the Beta Pi chapter. Through the years, the PLS mission has steadfastly focused on fostering and supporting student and practitioner commitment to leadership within the profession of pharmacy.  Acceptance into PLS acknowledges leadership achievement and recognizes outstanding leaders of all types as recommended by their peers and faculty.  All PLS members are considered to be of high moral and ethical character.

The annual Beta Pi Chapter induction ceremony rotates between School of Pharmacy campuses and provides an opportunity for all members to gather and celebrate the accomplishments of both new and current members. This special event is open to all faculty, alumni and student members of PLS and to the family and friends of new inductees.

The 2016 induction was filled with laughter and good conversation over dinner and dessert and included an enlightening speech by Krystal Edwards, Pharm.D., the School of Pharmacy’s associate dean for career development.  The ceremony ended with the formal induction of new members, which adhered to the National PLS Ritual and included new inductees receiving an official member lapel pin and certificate, participating in a candle lighting and reciting the PLS oath.