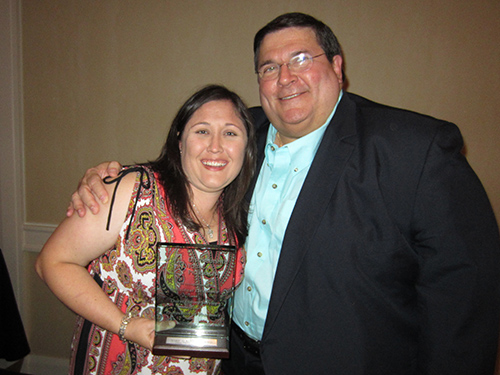 When School of Pharmacy alumna Mary Klein, Pharm.D., (Class of ’07) officially becomes president for the Texas Pharmacy Association (TPA), it will be the high point of a journey that began in 2003 when she arrived at the Texas Tech University Health Sciences Center (TTUHSC) campus in Amarillo.

TPA is a strong and omnipresent voice for all Texas pharmacy professionals, from the community pharmacy on the corner to the big chains, the hospitals and everything in between. The organization continually seeks to empower pharmacists to be effective health care advisors, and it has been the leading advocate for all things pharmacy in the Lone Star State since its inception in 1879.

Klein, an assistant professor for the Department of Pharmacy Practice at the TTUHSC campus in Abilene, is currently serving as TPA’s president-elect until she begins her one-year term in March. She has served the organization in many other capacities along the way, including as student academy chair, speaker of the TPA House of Delegates, director-at-large for the TPA Board of Directors and TPA vice president. She received the group’s Distinguished Young Pharmacist award in 2012.

“I joined the Texas Tech American Pharmacists Association-Academy of Student Pharmacists (APhA-ASP) chapter as a student and became a TPA student academy director that year,” Klein recalls. “I’ve literally worked my way up through TPA since then.”

For Klein, serving in such a visible way is just an extension of her overall involvement with her profession. She routinely precepts health fairs for TTUHSC’s pharmacy students and she has helped students conduct many flu shot clinics over the years. Because immunization awareness is one of her passions, Klein has presented numerous continuing education courses for pharmacists, including immunization certification courses. She currently serves on several APhA committees and has been a Texas delegate for the group’s House of Delegates since 2009.

At the Abilene campus Klein is the faculty advisor for the School of Pharmacy’s student APhA/TPA chapter and Phi Lambda Sigma Leadership Society chapter. She says serving professional organizations is one way she can give back to the profession.

“I have always believed that being involved is a key component of being a part of the profession of pharmacy,” Klein says. “This kind of involvement gives us an opportunity to shape the direction that the profession is headed."

At the end of the day, Klein says she loves her practice and she enjoys teaching students. She is also thankful to have a role in shaping the future of the pharmacy profession through her involvement in lobbying and professional service.

“To be able to do those things for my profession is truly humbling and satisfying.”