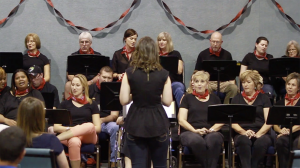 Aphasia affects approximately 1 million individuals in the U.S., according to the American Speech-Language-Hearing Association, and strikes as the result of a stroke or other brain injury. The condition creates difficulty producing and understanding language and reading and writing. However, aphasia does not interfere with or diminish intelligence. Each year, the summer camp serves as a way for persons with aphasia to express themselves creatively, which is particularly meaningful to individuals who have lost the ability to speak.

“We purposely hold our aphasia arts camp during June, which is Aphasia Awareness Month,” said Melinda Corwin, Ph.D., professor and director of the StAR Program at the TTUHSC Department of Speech, Language and Hearing Sciences. “Studies have shown that creativity, when combined with other speech therapies, can be helpful in improving the condition of aphasia.”

Corwin said many people with aphasia are able to sing, even if they cannot talk. Singing involves the right hemisphere of the brain, which is typically not damaged with aphasia. Speaking involves the left hemisphere, which often is damaged with a stroke or brain injury, resulting in a loss of speech. This phenomenon makes the aphasia choir possible. However, despite the condition affecting more people than Parkinson’s disease, many have never heard of the condition or have incorrect beliefs about aphasia and its effects.

“The camp and performance display the talents of StAR Program participants and give them an opportunity to express themselves, while also raising awareness about aphasia,” Corwin said. “The event changes misconceptions and shows that a loss of language is not a loss of intelligence or creativity.”