Caring for Families and Students 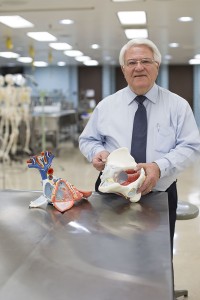 “We only had 40 students. 20 freshmen and 20 juniors with about 6 cadavers,” Lobstein said. “There was a big vent in the former kitchen area that would suck the fumes out. This was the location of our Gross Anatomy Lab. The cadavers were stored in the basement of Drane. There was no elevator so we had to carry the bodies down the staircases and get them to basement. We would carry bodies down and had an embalming room, which used to be a bathroom, and put the bodies in the morgue.”

Before coming to the School of Medicine, Lobstein worked at Sanders Funeral Home. He was hired by the School of Medicine to help create and build the Willed Body Program. The program provides cadavers donated for training and research for health care students. As the school grew into a health sciences center, there was an increase in the use of bodies with more students, residents and new schools added.

Through the past 43 years, names of willed bodies fill four filing cabinets. Lobstein has kept records of every donated cadaver since the school started. Presently, 5,343 cadavers have been donated and used. He has built the program to another 6,069 who have willed their bodies, yet are still living.

Thomas McGovern, Ed.D., said the Willed Body Program has succeeded because of Lobstein.

“He brings exquisite compassion and care to the families of the program,” McGovern said. “He is a meaningful and elegant gentleman. The way he reached out to people and the one-on-one care is immediate.”

That care and compassion included making a call to every funeral home in West Texas for Lobstein.

“When we first started, I needed to contact the funeral homes to establish a way to contact possible families interested in donating bodies,” Lobstein said. “ I sent a letter to every one of them and did it on a typewriter with carbon paper. The next job was to rent a car and start visiting with each home face-to-face. I wanted them to have a face to put with a name. We started getting bodies for the program. The program grew.”

Lobstein never pictured himself doing work with cadavers. As a high school student, he started working at Chambers Funeral Home in Abernathy. The part time job was a means to put gas in his Ford Falcon. Back in those days, funeral homes ran ambulance services. Lobstein would help run the ambulance.

“I would help during the summer and did numerous jobs from being a janitor, washing the car and mowing the grass,” Lobstein said. “It started as summer job, but it got busy and Mr. Chambers would call and ask for me to come help dress a body and then help at funerals on weekends.

Lobstein said working in a funeral home wasn’t something that appealed to him at first, but it was a necessity to help with his car and bills.

“There was a different mindset back then,” Lobstein said. “You did what you had to. My daddy was a famer and was dirt poor. I said I would never be a farmer wanting to pull cotton by hand. We didn’t have a whole lot at my house and my mom wasn’t in good health. I needed to work and make some money.”

Working at the funeral home, Lobstein remembers the first body he helped take care of was that of his next-door neighbor. Being from a small town, everyone knew each other. Even though it was upsetting, Lobstein said he sucked it up and took great care for the body. 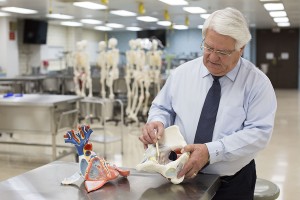 “Although I was not comfortable at first, I later realized I was helping the family and I finally decided that I wanted to go into this field because I enjoy serving people,” Lobstein said. “ I would later receive my degree from mortuary school.”

Vaughan Lee, Ph.D., assistant dean and the Dr. Bernell Dalley Endowed Professor of Medical Education, said Lobstein’s success is in part of how he relates so well to the families.

“Families come in to discuss and fill out the Willed Body Program information, and I am always amazed hearing his interaction with the family members,” Lee said. “When he talks to them, it’s almost as if he is a member of their family.”

Lee said most medical students remark that the anatomy work was the key in what they learned as a student. It also may be their first exposure to death and are able to relate the cadaver to another human being.

“The cadaver was a person,” Lee said. “The learning process includes developing their own personal relationship and a positive attitude towards patients. We would not be able to offer them that experience without the Willed Body Program.”

Lobstein will retire in January after 43 years and will leave with many memories. He fondly remembers dressing up as Mrs. Santa Clause along with Santa Clause played by Bernell Dalley, Ph.D., for a Christmas party for medical students. The event was held in pod c when it was still an empty shell. But, his favorite memory will be moving into the new gross anatomy lab. The new building now had a wide elevator, morgue, embalming room and grew from six body tanks to 45. Recently, the School of Medicine also gave him the award for Outstanding Achievement.

“I hope I have done something right and been a positive asset to the institution,” Lobstein said. “My job has been to work with families who wish to donate and it has been really rewarding to hear from them. Also, to see all of the health care students who are now professionals, to see them practicing is so rewarding. I will probably tear up when I leave. I have been coming to same place for 43 years and I am going to miss the people. It feels good that I have been part of something so good.”