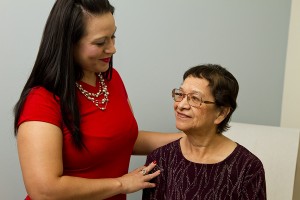 The Texas Tech University Health Sciences Center (TTUHSC) School of Nursing Larry Combest Community Health and Wellness Center strives daily to provide quality women’s health care services from experts, including Sandra Eastling, MSN, CNM, WHNP-BC, nurse-midwife and women’s health nurse practitioner. Eastling explained how important it is for women to take charge of their health by adopting a number of healthy habits, some of which actually reduce the risk of cervical cancer.

At well-woman exams, Eastling offers insight and advice to women regarding other issues, including HPV, which can actually lead to cervical cancer.

“We discuss body awareness, self care, self monitoring and the possible symptoms of cervical cancer as well as how to protect yourself with safe sex habits,” Eastling said. “New guidelines for pap screenings, HPV testing and the HPV vaccine are issues commonly addressed in a well-woman exam.”

Eastling takes the opportunity in well-woman exams to discuss the benefits of the HPV vaccine, how preventing an HPV infection can reduce the risk of cancer and answers her patients’ questions to determine if the vaccine is right for them. Since the typical annual well-woman exam was first recommended and implemented, Eastling said women’s health care has improved significantly.

Eastling said that despite this victory, there are still far too many women who forego their annual well-woman visit, and are therefore putting themselves at risk.

Eastling said that cervical cancer is more treatable than ever, but it can still be a deadly disease and women must get their well-woman exams on time for early detection and the best possible outcome. The National Cervical Cancer Coalition estimates that more than 12,000 women will be diagnosed with cervical cancer this year and more than 4,000 women will die from it

“Women who attend their yearly well-woman exam will be generally healthier because issues that are preventable can be addressed, like cervical cancer, pre-diabetes and pre-hypertension,” Eastling said. “In the long run, regular well-woman exams will decrease a woman’s health issues and prolong her life.”

While all women should attend their recommended well-woman exams, some women are actually at a higher risk for cervical cancer and other issues.

“Cervical cancer is found most in women between the ages of 35 and 50 who have not had a well-woman exam or pap smear in the last three to five years,” Eastling said. “Often these women put the needs of family before their own needs and do not attend well-woman exams because they feel healthy.”