Dr. Kalkunte Srivenugopal’s research received a boost when CPRIT named him a recipient of an IIRACCA award. 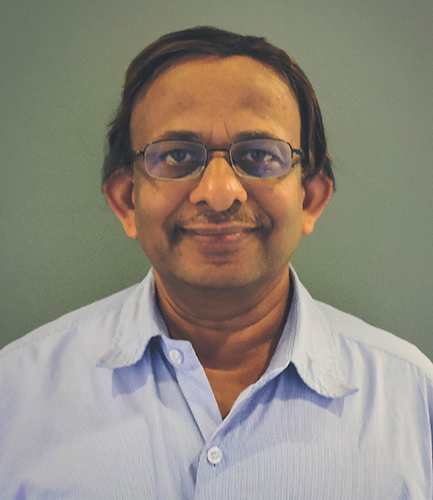 Each year, about 4,300 children are diagnosed with brain tumors in the United States. In fact, childhood brain tumors rank as number two killer among pediatric cancer patients, second only to leukemia. Trying to improve outcomes for these young patients is what drives researchers like Dr. Kalkunte Srivenugopal and his colleagues to spend long hours in the laboratory looking for answers.

Srivenugopal’s research at the Texas Tech University Health Sciences Center School of Pharmacy in Amarillo received a boost in November when the Cancer Prevention and Research Institute of Texas (CPRIT) named him a recipient of an Individual Investigator Research Award for Cancer in Children and Adolescents (IIRACCA).

The four-year, $1.23 million grant, titled, “BBB-penetrating redox-responsive smart drugs and exploiting the MGMT-driven S-phase checkpoint for chemotherapy of childhood brain cancers,” is a competitive renewal of a CPRIT grant Srivenugopal received in 2012.

“Our proposal received an outstanding rating,” Srivenugopal said. “Only seven applications out of 45 were selected in the IIRACCA category, so we are happy to obtain continued CPRIT funding for our research in these difficult times.”

Over the last twenty years, Srivenugopal said there have been marked improvements in the survival rates of patients with mild medulloblastomas, the most common type of malignant pediatric brain cancer that originates in the rear portion of the brain called the cerebellum. However, he said the outlook for children with other brain cancers in the brainstem and spine, called gliomas, has changed very little.

“Every pediatric brain tumor patient goes through chemotherapy using alkylating agents, which is often preferred to radiation because of the ill-effects of the latter on the developing brain,” Srivenugopal explained. “However, the treatment fails because these tumors have multiple genetic abnormalities, and malignant cells can escape the cytotoxic effects of drugs and develop resistance.”

Because chemo-drugs for brain cancers are scarce and have changed little over the years, Srivenugopal said there is a significant need to find new and more effective drugs.

“Drugs that can hit multiple targets simultaneously will be particularly useful,” he added.

With that goal in mind, Srivenugopal’s research seeks to discover targeted drugs for childhood brain tumors that will exploit the cell biology of a DNA repair protein known as MGMT for chemotherapy using agents specific to the S-phase, which is the DNA synthesis phase of a cell’s cycle. His research will help to initiate clinical trials using new drugs.

“We are a cell biology/chemistry laboratory and have synthesized a small molecule called KSS-72, which gets into the brain, increases the oxidative stress, affects multiple targets and kills glioblastoma cells in cultures and in mice. We will engineer KSS-72 to selectively deliver DNA damaging agents to brain cancers.”

In addition, Srivenugopal said the MGMT repair protein has been found to have non-repair functions in DNA replication, which means inhibiting MGMT activity can reduce the scope of DNA synthesis.

“This finding provides us a new strategy: combining the MGMT inhibitors with drugs that curtail DNA synthesis to achieve brain tumor regression,” he added. “We will synthesize novel amino acid-linked and brain penetrating S-phase-specific drugs and test all compounds in cell culture and brain cancer models. Our efforts represent a major step forward in pediatric brain tumor management”.

For more information about the research underway at the TTUHSC School of Pharmacy, visit the school's Office of Sciences website.