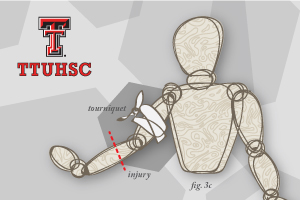 The unfortunate upsurge in mass shootings in the United States has focused a lot of attention on how to reduce the number of lives lost in each of these tragic events. Following the shooting at Sandy Hook elementary, a group of first responders, law enforcement personnel and government officials teamed with the American College of Surgeons to develop a strategy to improve the response to these events. This group developed the Hartford Consensus, which summarized the essential steps of responding to a mass shooting under the acronym THREAT.

THREAT stands for Threat suppression (neutralizing the shooter, disarming a bomb), Hemorrhage control (stopping the bleeding), Rapid Extrication to safety, Assessment by medical providers and Transport to definitive care. While developed specifically for active shooter events, this system also works well in more common mass casualty events such as multiple car pileups on a highway or a train collision, both of which have occurred in the Panhandle recently.

Sharmila Dissanaike, M.D., Texas Tech Physicians-Surgery, said one of the lessons learned from recent events including the Boston Marathon bombing and the Orlando nightclub shooting, is that the key to saving lives is to stop bleeding quickly.

“Most men, women and children who die from mass shootings will do so from bleeding, and much of the blood loss happens in the first few minutes after the shooting,” Dissanaike said. “Time is of the essence, and transporting victims to their nearest trauma center as soon as possible is essential. However, it also is possible to control many types of bleeding at the scene without a lot of specialized equipment; this in turn buys the patient time until a surgeon can stop the bleeding permanently.”

Since time is of the essence, Dissanaike, who also is the chair of the Texas Tech University Health Sciences Center Department of Surgery, medical director of the John A. Griswold Trauma Center and assistant medical director of the Timothy J. Harnar Burn Center at UMC Health System, said training civilian bystanders who are already at the scene to apply basic techniques to control bleeding has become one of the biggest focus areas of this campaign, appropriately named Stop the Bleed.

“Just as training people in CPR has helped improve the survival of those who suffer a heart attack at home, work or in public areas, it is expected that arming our community with the information and training necessary to respond to their injured fellow citizens will reduce the death toll of future mass casualty incidents,” Dissanaike said. “Given the right training and equipment, we can all be “first responders” and contribute to saving lives.”

The Stop the Bleed campaign trains people in the basics of controlling bleeding from arms and legs, primarily by using a tourniquet. They also receive training in how to stop bleeding from the head or trunk. In addition to training, Stop the Bleed kits containing easy-to-apply tourniquets and compression bandages have been created, and are distributed during the sessions.

“The eventual goal is to have these in public places similar to defibrillators that are currently available in shopping malls and airports,” Dissanaike said. “In addition, there is an initiative to have them installed in every new vehicle as a quick and easy access to useful supplies.”

Lubbock was one of the first regions in Texas to start training personnel in schools and other workplaces in Stop the Bleed. Texas Tech Trauma Surgeons, Trauma Service Area-B (B-RAC), UMC Emergency Medical Services and UMC’s John A. Griswold Trauma Center have taken the leadership role in educating health care providers to train the general public. So far, education programs have been offered in Lubbock and Levelland with plans to spread through the region. For more information on how to sign up for a course, please contact (806) 775- 9315.