Vaccine Could Impact Millions Across the Globe 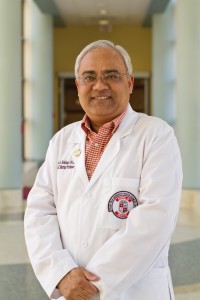 Schistosomiasis, a tropical disease caused by several types of open-water parasites called scistosoma, affects over 200 million people in 74 countries due to lack of clean water. Today, a discovery in a Texas Tech University Health Sciences Center (TTUHSC) research laboratory looks to reduce the number of infections from this disease.

Afzal A. Siddiqui, Ph.D., a Grover E. Murray Distinguished Professor in the TTUHSC School of Medicine, has developed a scistosoma vaccine that could help eradicate this parasitic disease, saving millions of lives. Siddiqui recently received a patent from the U.S. Patent and Trademark Office for his schistosomiasis vaccine.

The Bill & Melinda Gates Foundation has supported Siddiqui’s research, in order to eventually develop an affordable vaccine for all who are in need. Recently, he also received a $3.82 million grant from the National Institutes of Health. The three-year NIAID/SBIR-R44 Phase II Grant is to prepare the Schistosomiasis Vaccine (SchistoShield®) for human clinical trials. This phase of the research funding is in collaboration with Darrick Carter, president and CEO of PAI Life Science in Seattle, WA.

“We worked to get the patent to deter others who are making money off this vaccine,” Siddiqui said. “This way, it can be made for $1 per vaccination and distributed to those in need. An effective schistosomiasis vaccine has the potential to impact one billion people.”

According to the World Health Organization, there are no commercially available vaccines against schistosomiasis. Praziquantel, a drug developed over 40 years ago, is the only effective treatment available for schistosomiasis. However, re-infection frequently occurs following drug treatment.

Symptomatic schistosomiasis can result in increased susceptibility to sexually transmitted infections including HIV, which is prevalent in many countries plagued by schistosomiasis, including Asia, Africa and South America.

Siddiqui’s schistosomiasis vaccine, SchistoShield®, offers unique opportunities for organizations to market it as a method for completely eliminating this disease. The vaccine’s advantages make it easy to sell because it eliminates the instances of re-infection common with the current chemotherapeutic drug, is easier and less expensive to distribute and can be administered with current chemotherapy regimen. Long-term vaccine efficacy will effectively reduce the transmission of schistosomiasis in endemic areas.

Schistosoma infection is transmitted through contact with contaminated water by parasites swimming freely in open bodies of water. Once contact is made with humans, the parasite burrows into the skin, matures into another stage, and then migrates to the lungs and liver, where it matures into the adult form. Siddiqui said detection of calcified schistosome eggs in Egyptian mummies from the 20th dynasty (1250 to1000 BC) tells us that schistosomiasis is an ancient disease.

“Major pathology of schistosomiasis is due to immunological reactions to schistosome eggs trapped in tissues,” Siddiqui said. “Continuing infection causes enlargement of the liver and blood in urine. We see pictures of children from Africa with bulging bellies because of this disease.”

Despite mass treatment with drugs, infection rates continue to rise. An additional 800 million people are at risk of contracting schistosomiasis. Durable and sustained reduction in the disease spectrum and transmission can only be obtained by long-term protection through vaccination. Siddiqui has studied schistosomiasis for over 20 years working to develop this vaccine.