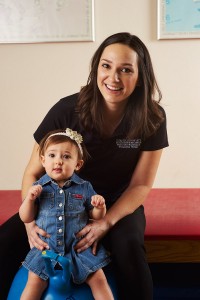 Rebecca Marquez remembers the day she took a walk that would lead her to a new leadership role. During the nerve-racking first-year anatomy class, the Student Government Association (SGA) leaders came into her classroom.

“We were stressed out about anatomy,” Marquez said. “It was our first semester together, and I didn’t know many people yet. Our brains are mush. When they asked for those who wanted to be an SGA representative to walk down to the stage, on a whim I went and wrote my name down. And that was the beginning of my leadership with the SGA.”

Marquez, a master of occupational therapy program student, currently serves as the SGA vice president of communications. She has been a leader in high school, church and at the universities she has attended.

“Leadership is something that comes naturally to me,” Marquez said. “I was always drawn to it. At the University of Texas, I was in a spirit group called the Texas Wrangler Darlings and worked with athletics marketing to get the group to be the official UT spirit group for women’s basketball games, which it is now. I was able to do that for the organization.”

Marquez grew up in Alameda, California by the San Francisco Bay Area. She graduated from a Catholic high school and attended the University of San Francisco her first year. After attending a smaller high school, she thought she wanted to attend a small college atmosphere, but found she was wrong. She would later transfer to the University of Texas and receive her Bachelor of Science degree in Kinesiology.

“I actually knew that I wanted to study occupational therapy (O.T.) early on when I was in high school,” Marquez said. “My senior year, I went to an O.T. program’s open house to get more information and from there planned on going into kinesiology knowing it was a field that would help me in O.T. I like having a plan.”

Marquez, who is in her second-year of the master of occupational therapy program in OT, said her plan is to work in pediatrics.

“I always have been drawn towards pediatrics,” Marquez said. “My first volunteer experience in undergrad was at a pediatric clinic, and it really solidified that I wanted to work with kids.”

During her level-one fieldwork at Memorial Hermann in Houston, she had the opportunity to work with adults. She worked at the Memorial Hermann Heart and Vascular Institute and the Mischer Neuroscience Institute in acute care for two weeks. Although that was her first experience with adults, she toured the pediatric unit and again solidified her love for that field.

“Usually when you work with kids, they don’t think they are coming to therapy. In their eyes, they are coming to play. We get to lay a lot of the developmental groundwork that makes a big impact throughout the rest of their lives. With smaller kids, we use obstacle courses, swinging equipment and fun activities. With pediatrics, it’s colorful and bright and smiles, more of an uplifting environment.“

Marquez hopes to educate people as to what occupational therapy is. She said an OT could work with someone from birth to death and anything in between. Whether it is a congenital disease, a contracted disease, an accident that happens, or a mental health issue.

“Our goal is to help people become as functional as possible to live the lives they want to live and do the things they want to do,” Marquez said. “We give people their lives back.”

Marquez was required to complete three level-ones in pediatric, mental health and adult care. She said one of her favorite fieldwork areas has been with mental health at the Children’s Home of Lubbock.

“It broke my heart to work with these kids,” Marquez said. “You just want to help all of them any way you can. We had a really tough group of boys. We would go once a week and put on a session for them that focused on building self-efficacy and interpersonal skills, things that may not necessarily be cultivated in their circumstances. We made a classroom contract of simple rules for the session. One little boy asked if a rule could be made that if someone’s shoes didn’t fit, they have to give them to someone else.”

Although she came from the University of Texas, Marquez said she has come to embrace the Texas Tech University Health Sciences Center.

“Its funny but TTUHSC was my last choice,” Marquez said. “And then I came and interviewed here and it completely changed my mind. After meeting the professors, students and seeing the facility, it became my number one choice immediately on interview day.”

She said getting into leadership here makes her appreciate the school even more. Seeing the efforts and professionalism that go into not only her program but also the school itself, impressed her.

“I cannot speak highly enough for this school. From the leadership of President Mitchell to all the professors and students, it is incredible, and the opportunities I was given here I would not have been given anywhere else. There is no other school with these opportunities. TTUHSC and the Master of Occupational Therapy program far exceeds my expectations.”