Researchers Looking for Better Treatments and Answers for Burn Injuries 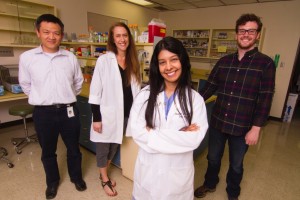 According to the National Institute of Health, today people with burns covering 90 percent of their bodies can survive, although they often have permanent impairments. More than 50 percent of burn patients are treated in specialized burn centers, and most hospitals have trauma teams that care exclusively for patients with traumatic injuries. These improvements of survival rates and quality of life stem from better medical and surgical care as a result of research done across the country.
Recently members of the Texas Tech University Health Sciences Center (TTUHSC) Department of Surgery presented their research at the American Burn Association’s 47th Annual Meeting. Sharmila Dissanaike, M.D., professor in the Department of Surgery and Director of the Burn Center for Research Excellence, said TTUHSC represented well at this national level for their research in the burn field.

“This is one of the largest conferences in the burn field,” Dissanaike said. “Very few other centers have this level of representation, including centers larger than TTUHSC.”
Along with Dissanaike, Abdul Hamood, Ph.D., John Griswold, M.D., Kendra Rumbaugh, Ph.D., Sheng Ping Yang, Ph.D., Jesus Hidalgo, M.D., a burn fellow and medical students Andrew Armstrong, Neil Doctor and Kara Amazivca all collaborated with various research projects.

Researchers looked at many aspects of what may affect a burn patient. In one study, a patient’s socioeconomic status was researched to see if it would affect the burn injury outcomes.

“By looking at zip codes, that can give you an idea to calculate an approximation of poverty,” Dissanaike said. “The research showed that patients who come from a high poverty area have five times the risk of having a graft loss as others in higher economic areas. This is quite significant and startling.”

Ninety percent of graft losses occurred in the hospital. The outcome of this study tells researchers that patients are probably coming in with a baseline poorer health, which contributes to their outcome care.

Researchers studied a cytokine profiles in humans and a mouse model of burns and infection. In the animal studies, it was noted that lean male mice had higher survival; however when the animals were obese, this benefit disappeared. This suggests that there are sex-based differences in survival in burns and sepsis, and that obesity alters these differences.

Comparing Cancer Outcomes with Burn Patients
Dissanike said the modified Glasgow Prognostic Score (MGPS) was originally developed for correlating the outcome and survival in cancer patients. This study looked at using the MGPS to see if it would help with burn patients. While the mGPS score itself had little value in burn patients, it led to further research on serum albumin. They found that the albumin measured close to admission correlates closely with the extent to the burn injury and lower values indicate the patient will have a prolonged length of a hospital stay.

“If you have a low serum below 2.4, your chances of having to stay longer than three weeks in the hospital is very high and vice versa,” Dissanaike said. “This study showed that serum albumin can be very predictive and also can predict burn severity.”

The researches showed that pseudomonas recognize what is going on in human blood and makes changes accordingly.

Dissanaike said Hamood was the first researcher to ever grow pseudomonas in blood versus chemicals like other researchers, the crucial first step in conducting this advanced research.

“He proved it can grow in blood,” Dissanaike said. “We know now that pseudomonas increases its capacity or virulence to cause infection based on changes in burn patients’ blood. So technically we can develop targets to block those specific genes in those patients because we know which genes are turned.

Dissanaike said although this is research is very preliminary, results can help develop better treatments for burn patients up the road. In this case the genes are activated in each host.

“Think about the implications for treatments with antibiotics,” Dissanaike said. “We have used antibiotics to treat all health issues the same, but this shows or implies that there is more to it than that. Antibiotics are not a machine gun that targets it all. This could be a whole different way to treat infection and maybe down the road lead to a vaccine. This is very early data, but can open up the possibility of new methods to treat infections.”