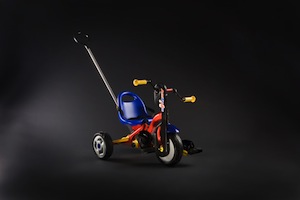 “AMBUCS’s mission is to create independence and mobility for persons with disabilities,” said Patty Vannoy, national AMBUCS president. “AMBUCS members and chapters all across the country meet this mission by providing therapeutic tricycles, called AmTrykes, to persons needing fun and therapy and by providing scholarships to students in the therapy fields.”

Many TTUHSC occupational therapy students benefit directly from scholarships provided by AMBUCS and respond with gratitude each year by coordinating fundraisers for the organization.

“Bake sales help our students fund several projects, but they set aside one bake sale in the fall or spring each year for AMBUCS specifically,” said Cynthia Tiongco, associate professor. “This year they were actually able to raise more than $600 and buy two AmTrykes for children.”

The AmTrykes serve to both give more mobility to disabled children and adults, as well as open new opportunities for fun.

“You actually need a therapist’s referral to get one,” Tiongco said. “The therapist measures the child for the AmTryke. They can be foot-propelled or hand-propelled, depending on the nature of the child’s disability.”

Tiongco said the benefits are extraordinary, as children are able to incorporate therapy into fun. While children with disabilities may be unable to participate in riding traditional bikes with others, the AmTrykes allow those children to engage with their peers.

“One child who received an AmTryke is looking forward to playing with it outside during the summer,” Tiongco said. “That’s what children like to do, and for a child who cannot ride a typical bike, or even a typical tricycle, they are left out of that. With this AmTryke that is custom-fit to them, not only does it give them fun therapy, but allows them to socialize with other children in a way that they might not be able to otherwise.”

The AmTrykes are versatile and can be customized to solve particular issues in mobility that the rider may face.

“When they are hand-propelled, the foot pedals may move as well, providing a therapeutic opportunity if the child needs to gain that range of motion with their legs, or vice-versa if the AmTryke is foot-propelled,” Tiongco explained. “It also provides bilateral coordination, so the two sides of the body are working to move the child forward. Plus, it’s fun.”

The AmTrykes provide an undeniable benefit, but for many families with children with disabilities, the individually customized tricycles may be cost-prohibitive. AMBUCS provides these AmTrykes at no cost to families that need them.

“AMBUCS provides the AmTrykes,” Tiongco said. “By supporting them, we support the kids.”

This year, both of the AmTrykes provided by the TTUHSC SOTA fundraiser went to disabled children in St. Louis, which does not have a local chapter of AMBUCS.  This created a need for funding to come from other areas.

“I asked if the bake sale funds could be used at a huge AmTryke giveaway the national AMBUCS organization was doing in St. Louis,” Vannoy said. “There is no AMBUCS chapter in St. Louis, so funds were needed from outside that area. The students agreed.”

The AmTryke giveaway was a huge success, and many attendees were particularly impressed that TTUHSC occupational therapy students succeeded in fully funding not only one, but two AmTrykes through the bake sale.

“Fifty children and 34 veterans, all with disabilities, were given AmTrykes,” Vannoy said. “The crowd was so impressed that SOTA students from TTTUHSC would use their time and talents raising money for these deserving children.”

The mutually beneficial relationship between TTUHSC occupational therapy students and AMBUCS has grown over the years, and Vannoy believes that by investing in the talented students of TTUHSC, the AMBUCS mission is progressed infinitely.

“AMBUCS feels that by helping one student become a therapist, we are touching the lives of all those individuals who that student will treat over the course of his or her career,” Vannoy explained. “It’s sort of a ‘pay it forward’ theory.”