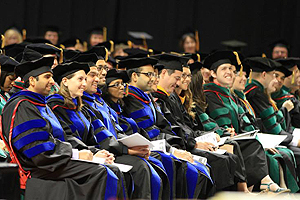 Students graduating from all TTUHSC schools participated in the ceremony.

Mitchell said commencement is an exciting time for faculty, students and family members.

“I have the honor of not only presiding over this ceremony, but also witnessing the celebration of all their hard work,” Mitchell said. “These graduates have received an exceptional education and have endless possibilities of contributing to patient care and research across this country.”

A Year of Firsts

More than 1,000 May graduates received degrees in various health disciplines (approximately another 859 students walked in the ceremony as December and August graduates). Hooding and student awards were presented at individual school convocations prior to the commencement ceremony. Awards presented were: 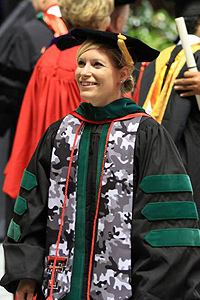 Prior to commencement, graduating military students were honored at a commissioning ceremony led by Richard Lampe, M.D., professor and chairman of the Department of Pediatrics, a retired colonel who served in the U.S. Army from 1968 to 1992.

During the ceremony, medical students representing the U.S. Air Force and U.S. Army took the oath of office and received the rank of captain.