Alumni Score Big in the NFL 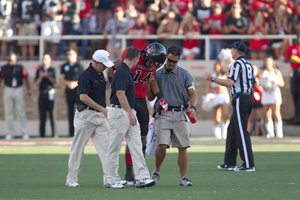 Before landing a job with the Jacksonville Jaguars, Quon gained valuable experience working for the Texas Tech football team.

Passing MVPs in the hall; attending training camp; walking into a packed stadium all in a day’s work for two School of Allied Health Sciences alumni who recently landed jobs with the NFL.

Doug Quon, MAT, ATC, of Agoura Hills, Calif., and Hanson Yang, DPT, LAT, ATC, of Houston, have spent the summer helping some of the country’s most elite athletes recover from injuries on the field.

Quon and Yang say although there has been a lot of on-the-job learning, the education they acquired at TTUHSC gave them the basic athletic training and physical therapy tools they needed as practitioners to hit the ground running.

“Whether you’re an old man or a young athlete, some injuries don’t change, and that’s something that going through the program at Texas Tech taught me,” said Yang, who graduated from the Doctor of Physical Therapy program in May and was hired as a rehabilitation coordinator and an athletic trainer for the Dallas Cowboys. “I just like the chance to help someone get better… and just getting to interact with people every day.”

Yang said when working to complete his doctorate in physical therapy, his main goal was to make himself more marketable as an athletic trainer. He never dreamed he’d end up working for a nationally recognized organization right out of the gate.

“When I was in athletic training, I loved football. I’ve always liked college football, and my dream was always to work in some capacity with football,” Yang said, “so obviously, when the NFL came calling, I wasn’t going to say no.”

Keep Your Head in the Game

Quon, a seasonal assistant athletic trainer with the Jacksonville Jaguars, was an athletic training intern with the Kansas City Chiefs before he was offered a full-time position with the NFL. He said the Master of Athletic Training program was strong academically and clinically, but there have been some on-the-job challenges he wasn’t prepared for.

“All of our orthopedic evaluation classes were very detailed and have prepared me to be a very proficient athletic trainer,” Quon said. “The most challenging part of the job is keeping your mind sharp and paying attention to details after a long days’ work, especially during (training) camp when you are only getting four hours of sleep a night.”

Quon said his workday typically consists of treatment, rehabilitation and taping scheduled around players’ practices and meetings. In addition, an athletic trainer is always on call during the night in case any health issues need to be addressed after hours.

“Working in the NFL and many Division I athletics programs is a tough job,” Quon said. “The job and hours make it tough to have and raise a family. But, if you can find someone special enough to appreciate the passion you have for this field of work, that’s when you know you’ve made it.”

But the job also has its perks, Quon said.

“In athletics, your patients often are very motivated to work hard at their treatment and rehabilitation programs,” Quon said. “You set goals and help them to achieve them. It is very rewarding.”

Yang, a former Houston Oilers fan, said his biggest challenge at work has been getting to know his employer by brushing up on Dallas Cowboys trivia.

“I got a lot of flack for not being a Cowboys fan. I’ve had to do quite a bit of extra homework,” Yang said. “Overall, it’s easy to say it’s just a job, but it’s not because it is working for a prestigious organization. Every day I just look forward to going to work and improving myself.”