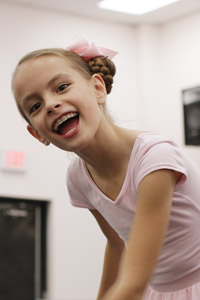 Individual sports can be better for children with autism because they require less social interaction.

Before a video of a 10-year-old autistic ballerina went viral on YouTube, the Department of Speech, Language and Hearing Sciences began organizing a ballet class for Lubbock-area children with autism spectrum disorders.

Autism spectrum disorders are a group of developmental brain disorders with the main symptoms involving communication, social interaction and repetitive behaviors. People with autism can have different symptoms, ranging from mild to severe. The Centers for Disease Control and Prevention estimates about 1 in 88 children in the U.S. are affected by autism.

“We’ve really seen improvement in several of the kids. One of our kids actually said, ‘that was fun today,’ at the end of class, and that was really exciting because usually he doesn’t say much,” Barhorst said. “It was really good to see that, and it’s just great to see them interacting with the other dancers.”

The Best of Both Worlds

Barhorst, a senior honor’s psychology major at Texas Tech, has been dancing at Ballet Lubbock for 15 years and has taught beginner ballet classes for three. So, when it came time to work on her honor’s thesis about ballet and memory, combining her two talents came naturally.

“Over the summer I was inspired by the combination of psychology and ballet and I had been doing research for my thesis about therapeutic benefits of dance and I came across autism dance movement therapy in particular and I just thought it was really interesting and I had never heard of anything like that in Lubbock,” Barhorst said. “I’ve found that [ballet] is a great way of expression because there is a language block for a lot of autistic kids, and they don’t know how to express themselves verbally. This is a good way for them to let loose, make friends, have fun and interpret music.”

Barhorst contacted Sherry Sancibrian, M.S., CCC-SLP, director of Speech-Language Pathology, who then recruited Rich and Tinney to help with behavioral issues, scheduling and to help the children get used to their environment.

“Not only do I think that ballet is great for memory improvement in general, they’ve done research with people who have Alzheimer’s disease and that it actually increases hippocampal volume," Barhorst said. "Not only is it physiologically a benefit, it’s also just – the social network around a ballet studio is really special.”

Sancibrian said individual sports like dance, track, gymnastics, swimming and martial arts can be beneficial for children with autism because they require less social interaction than team sports like football or soccer.

“Everyone with this diagnosis struggles with social interaction,” Sancibrian said. “They may have difficulty using and understanding facial expressions and body language, forming friendships and understanding other people’s feelings and motivations.”

All sports also require some discipline and a relatively long attention span, which can be challenging for children with autism as well. To help with this, Rich and Tinney have implemented picture schedules, transition songs and marked spots on the dance floor for each student.

“A class like this is geared towards their specific needs. We are also learning that there are guidelines and boundaries in this class, and so we do have to follow the rules,” Rich said. "Just from the first week we’ve seen such progress they’re able to handle the schedule; handle the transitions; and we implement new activities every week and it’s exciting for them.”

At the end of the semester Rich said she hopes the children will be ready to perform a show for their parents.

For more information about the ballet class for autistic children or about other local autism resources, call Sancibrian at (806) 743-5660 or email sherry.sancibrian@ttuhsc.edu.