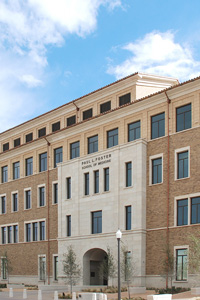 A new health sciences university is expected to help address a shortage of health care professionals in El Paso and surrounding areas.

The Board of Regents has approved to initiate the process of establishing a freestanding health sciences university in El Paso. The new university will join TTUHSC, Texas Tech and Angelo State University under the Texas Tech University System as a fourth, separate but equal institution.

“Having a freestanding health sciences university in El Paso will be a tremendous asset to the community and will further our efforts to address the shortages of health care professionals in the region and the entire state,” said Chancellor Kent Hance. “We look forward to working with the Texas Legislature to make this significant goal a reality.”

El Paso is the fourth most populous city in the state with a population of more than 700,000. With such an immense population, this region has been federally designated as a medically underserved area.

“A health sciences university in El Paso will provide an outstanding education for the culturally diverse communities in this area, promote crucial research related to Latino and other underserved populations, and serve as a nationally recognized primary and specialty referral center for quality patient care,” said Jose Manuel de la Rosa, M.D., founding dean of the Paul L. Foster School of Medicine.

In the past several years, a sound foundation has been solidified for an autonomous health sciences university in El Paso. The Paul L. Foster School of Medicine in El Paso received preliminary accreditation in February 2008 and opened in 2009. In 2008, university administrators took the first step toward establishing a full-fledged health sciences university in El Paso by implementing an accelerated Second Degree Bachelor’s of Science in Nursing (BSN) program.

Nursing programs expanded in August 2009 to include a traditional BSN program. The Gayle Greve Hunt School of Nursing, an autonomous, fully-accredited nursing school at the TTUHSC campus in El Paso was established in October 2010.

“With the support of the El Paso community, the areas surrounding the Paul L. Foster School of Medicine have grown to include the El Paso Children’s Hospital, an expanded University Medical Center’s women’s hospital and the Gayle Greve Hunt School of Nursing,” said Texas Tech University System Regent Rick Francis. “We are confident El Paso residents will continue to support TTUHSC as the region’s health care community continues to flourish.”