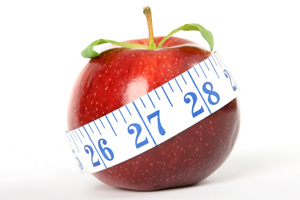 According to the National Institutes of Health, people lose on average 20 percent more weight when they combine a healthy diet with exercise than with diet alone.

Americans spend $40 billion a year on weight loss programs and products. Often, the money is spent on the latest diet craze with promises of quick results. The truth is, losing weight is hard and requires long-term commitments.

Do something for exercise. It could be as simple as walking to the store, hitting the park with your four-legged friend or taking dance lessons with your spouse.

“Make it something you like,” Walker said. “If you don’t like it, you won’t keep it up.”

Drink more water and avoid sugary drinks. The fact is that many drinks, like Gatorade, were developed for athletes participating in prolonged, intense physical activity. For most people, the beverages amount to another source of calories that can be hard to burn. Walker also suggested drinking a big glass of water before meals since it can help you feel full with less food.

Add, don’t subtract. “Add cherries or grapes or peas,” Walker said. “Add them to your breakfast cereal or to your lunch and think positive.”

Eat smaller portions. This can be hard, especially when portions at restaurants are so large. Walker suggested splitting with a friend. In fact, many people have started asking for half of their order to go and save it for lunch the next day.

When cooking at home, Walker encouraged people to spice up their tables by trying new recipes.

Set goals and reward yourself. “Set a goal, such as losing three pounds per week,” Walker added. “If you do this, you will lose 36 pounds in three months.”

Finally, Walker said to reward yourself, however, the reward should be a fun activity and not a high-calorie treat.