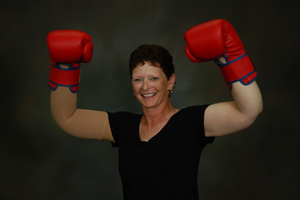 On what she describes as one of the most terrifying days of her life, Pierce participated in the UBCC's Knock Out Breast Cancer fashion show with fellow survivors.

When Julie Pierce was a teenager, her father told her, "If you expect life to be fair then you will be disappointed many days of your life. Yet if there are no expectations then every day is a gift."

Pierce hung on to those words when she battled breast cancer the first time in 1999 and again in 2010.

On her first battle, she made it through chemotherapy and surgery a mastectomy and was in remission for 12 years until she discovered several swollen lymph glands. For the second time, Pierce turned to the University Breast Care Center (UBCC) for answers.

At 45 years old, Pierce, who makes her living as a long-haul truck driver, was once again diagnosed with breast cancer and began the chemotherapy and surgery. Things didn’t go quite the same as her first diagnosis. A large blood clot had been found under her chemotherapy port and she needed additional surgery.

“I threw a fit when I had the blood clot because I did not want to be hospitalized again,” Pierce said. “But Mary Carmen (UBCC’s patient support services coordinator) was battling her own illness and came out to sit with me and calmed me down. She’s quite an inspiration and a hero to me.”

Because of surgery, Pierce was temporarily unable to work the job she has held and loved for 27 years.

“They’ll have to pry my cold dead hands off the wheel,” she joked. 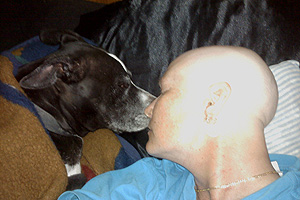 Pierce credits her dog, Zoe, for giving her life during her first bout with breast cancer.

Taking Back Her Life

Luckily, her absence from driving was short lived. One day in September, she was given the all clear from physicians at the UBCC. However, for someone who had successfully battled breast cancer twice, it was still a day she says was probably the most terrifying of her life the UBCC’s Knock Out Breast Cancer fashion show.

“I drive all over the country by myself and walk through dark parking lots at night alone, but that [the fashion show] was totally out of my comfort zone,” Pierce said. “I’m happy I didn’t trip and fall or pass out. I am really very shy.”

One Day at a Time

Although Pierce is now returning to her life as it was before, she has to be careful of the lymphedema in her arms as well as any cuts because of the risk of infection. She’s also been advised not to participate in any heavy lifting, but because her job is so physical she said that might be difficult to avoid. For now she’s easing back into work and enjoying the company of her dog Zoe, a black pit bull who battled cancer herself and travels with Pierce on all her trips.

“Zoe means life in Greek, which is exactly what she gave back to me during my first round with cancer,” Pierce said. “She kept me moving and caring about something other than being ill.”

Pierce credits everyone at the UBCC for helping her get through her diagnosis, surgery and recovery.

“They are the most terrific people,” she said. “I really have no words for how great these people are.”

Pierce elected not to have breast reconstruction for several reasons, but mainly because she didn’t want to worry about implant ruptures, as her job can be quite physical. However, the future is something Pierce tries not to dwell on much.

“It is what it is,” she said. “I live for today. Life is a gift and every day that I see that big orange ball rise up in the sky, I thank God for that gift. Nothing is a given and nothing worthwhile comes without a fight.”

Her father would be proud.