Emergency Medicine Graduates Prepared for Anything 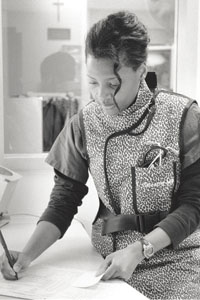 Sabrina Taylor, M.D., assistant professor and director of clinical simulation in the Department of Emergency Medicine at the Paul L. Foster School of Medicine, set out on an adventure in 2005, when she decided to complete her emergency medicine residency in El Paso.

Taylor took herself out of her East Coast comfort zone to learn about the country’s growing Hispanic population. When she arrived in Texas, Taylor discovered a grateful patient population, the opportunity to learn Spanish and understand Hispanic culture, and an outpouring of education, empathy and enthusiasm.

“You get to feed your soul and make a difference,” Taylor said of her experience as an emergency medial physician on the U.S./Mexico border.

The school's close proximity to Mexico gives doctors a broad medical view of many problems rarely seen in other parts of the U.S. Texas Tech Physicians of El Paso have cared for patients with ailments as diverse as botulism, snake bites, hypothermia and heat stroke. To facilitate communication with patients who do not speak English, the emergency medicine program offers residents medical Spanish immersion classes.

When physicians complete this three-year residency program, they are capable of working in any emergency room in the world, said Veronica L. Greer, M.D., assistant professor and Residency Program director in the Department of Emergency Medicine. As one of three trauma centers in El Paso, one of two non-military facilities, the Paul L. Foster School of Medicine’s Department of Emergency Medicine handles a major portion of trauma care. In addition, the department supplies medical control for El Paso Emergency Medical Services and provides physician direction and sponsorship for the El Paso Poison Control Center.

The Emergency Medicine Residency Program at the Paul L. Foster School of Medicine began in 1982 and it is the oldest civilian emergency medicine residency in Texas. The program receives approximately 400 applications each year, Greer said.

“Being a part of a border community is a big draw,” Greer said. “[El Paso emergency physicians] deal with international issues every day and work with a large Hispanic patient population.”

Ten students have been accepted into the program each year since 2008. Since 2006, the school has graduated 46 emergency medicine resident physicians.